They Said It Best: Characters in Writing 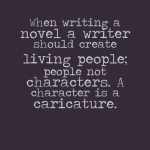 My last post reviewed must haves for constructing a plot, a topic that was hard to focus on without mentioning the development of characters. Though some books may be classed as literary, more character focused, others could be considered more plot-focused. But truly successful storytelling relies so much on a careful balance between the two. And that leads to the articles I’d like to share today. My favorite go-to posts focus on how plot and character go hand-in-hand.

First up, REUTS Sr. Editor Kisa Whipkey explains the basics between plot-focused, character-focused, and idea-focused storylines in her post Which Comes First, Character or Plot?

“This is the literary equivalent of the chicken and egg scenario. Plot needs character in order for it to resonate emotionally with readers, and character without plot is really just someone standing around doing nothing. But which comes first?”

Author Debra Vega points out that plot and character aren’t independent of each other, but work together to create a successful storyline in The Symbiotic Relationship Between Character And Plot.

“It kind of aggravates me when people—writers included—differentiate between plot-driven and character-driven stories. Basically, because character and plot are not mutually exclusive entities.”

Furthermore, not only are plot and character pieces of a machine that should work together, they’re inseparable! Author Nathan Bransford weighs in on why Character and Plots are Inseparable.

“Writers sometimes say they start with a compelling character and go from there. Often it’s just a sketch of someone who intrigues them, and they build a world around that character. Plot? An afterthought! [But] how is that character’s conflict revealed? Through the plot! What good is an interesting character if they aren’t doing anything?”

Another fantastic resource is author Ava Jae’s blog. She’s written dozens of articles examining character development specifics, delving into the nitty gritty of building “real” characters. If you’re looking for tips and info, check out her directory on Character Development.

So even though we may focus on one of these aspects at a time as we’re drafting and developing a manuscript, it’s important to consider how they work together as a whole. As mentioned before, the best stories have plot and character intricately laced together to create a well-rounded story.

Share your thoughts and/or tips on character development and how plot plays into it in the comments below. Because of Easter break and family visiting, the next post in this series will be April 22, 2015. We’ll discuss the importance of CPs and Beta Readers! See you then!