FRED, THE VAMPIRE ACCOUNTANT on Amazon

I’ve been reading the uber fantastic and utterly amazing new release from Drew Hayes. And I couldn’t help but wonder what songs might grace the soundtrack of FRED, THE VAMPIRE ACCOUNTANT. Drew was nice enough to humor me (for your benefit of course) and put together the following playlist (one I’d definitely buy!):

Whoa Oh! (Me vs Everyone) by Forever The Sickest Kids – This one just rings of Fred to me, because it’s about being stuck in ridiculous situations, yet the tone of it isn’t at all defeatist. Reminds me of my cowardly yet indomitable creation.

The Geeks Get The Girls by American Hi-Fi – I almost used this as a scene song, because the bumbling account of inadvertent success reminds me so much of Fred and Krystal in the first story. I felt like it embodied Fred’s romantic skills as a whole better than any single encounter, hence why it’s here.

Beer For My Horses by Toby Keith – I know the immediate reaction is that this song be a Bubba song, but I have to give it to Krystal. To me, she’s a lot like a modern-day cowboy: gun in hand, roaming the land, putting bad guys in the ground (sometimes not for the first time).

Thinking of You by Ke$ha – This one really doesn’t make much sense without knowing Krystal’s backstory, though I put enough hints in the book that you can probably piece it together. Trust me, the first time I was on a jog, and Pandora played this, Krystal was the only character I could think of.

Happy by Pharrell – Simple, almost dumb, lyrics and a cheerful beat. It would be hard to find a song that better encompassed Fred’s zombie assistant.

Pretty Good At Drinkin’ Beer by Billy Currington – Despite the hecticness the we first see Bubba in, this song captures his essence quite well. Just a simple man with simple joys, living his life the best way he knows how.

Because I Got High by Afroman – I’m not even going to explain this one, I think it’s pretty self-evident.

High School Never Ends by Bowling For Soup – I strongly associate this with Fred’s high school reunion in the first story. Up until the werewolves attack, this does a fine job of summing up how stuck Fred feels in who he was and how the world saw him. It’s as if nothing has really changed. Which, of course, makes it all the more fun when he learns just how wrong he is.

Hum Hallelujah by Fall Out Boy –  This one might have actually influenced the scene I associate it with, it’s hard to remember that far back. I know that in my head the two are connected though, more for the chorus than the stanza lyrics, but something about the sense of thing being totally hopeless, only for an impossible miracle to break through, was really what I wanted to capture Fred experiencing in the final story’s church fight.

Give Drew a shout out and let him know what you think! Now, go forth, read FRED and rock out! 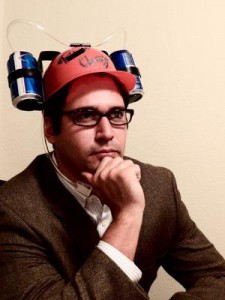