Welcome to today’s stop on the Blog Tour for FLUX by Ellie Carstens. When I heard this story was set in Norway, I was instantly interested (as I’ve always had this fascination with Norway for some reason). And Vikings too? Incredible. While I haven’t completely finished the book yet, I can say Carstens grabs you from page one and weaves an absolutely beautiful story with her writing. 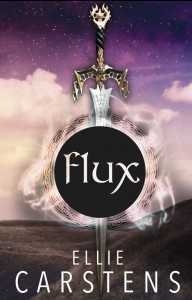 The last thing sixteen-year-old Alaina Oftedahl-Miller expected was to watch her mom brutally destroy their life.

But, in the wake of tragedy, strength forms. Shipped off to live with her birth father, Alaina finds herself dealing with more than just being the new Canadian girl in a Norwegian school. Juggling the formation of a relationship with the man who abandoned her as a child, and a budding attraction to Kaius Vargøy–the mysterious, beautiful classmate who’s been assigned as her personal translator–Alaina can’t shake the feeling that every move she makes is being watched. Judged.

She soon learns there’s far more to this sleepy Norwegian town than she ever imagined. Kaius and his friends aren’t exactly what they seem, and the repercussions of that could send her traveling through the most unexpected experience of her life. Murder and relocation is one thing, but add in supernatural occurrences and Vikings, and even she may not have the strength to survive.

My heart swelled with devastating anguish, shrouding me in the inconsolable grief that had become my constant companion. A reminder that normal didn’t exist in my world anymore, and maybe never would again.

Ghosts of those memories taunted me, showing me glimpses of light and buildings and smiles, even sharing scents and sounds.

A slow, lazy grin curled one half of his mouth; the kind people get when they’re enjoying a private joke. The world could have exploded. The sun could have died out, taking very source of natural and man-made light with it, and I wouldn’t have noticed. I would have retained enough light to see from the radiance of his smile alone.

Slightly rough and entirely too stimulating for words, his fingertips located my lips and continuously moved over the outer edges. Taunting. Teasing. Promising something I wasn’t familiar with, but desperately wanted.

The pain I’d suffered at the loss of my entire life, the loss of everything I knew, returned with enough force to make me nauseous, giving me a migraine, and bringing magma-hot tears to my eyes.

I steeled myself, trying to keep my enthusiasm from showing. If I were to pump my fist in the air, I’d no doubt look very much like an imbecile.

Falling snowflakes paused in mid-air, birds in flight, too. Not a single thing moved, except for my gaze, swinging painfully slow, back to where I’d last seen Halvard.

With Kaius though, a kiss was anything but simple. It was so much more than just lips touching, tongues tasting, and an embrace. His kiss held a promise.

Alaina truly did look like a beautiful, ancient Norsewoman, the type who had graced the bows of longships. The kind legends were written after.

Shadows hid the cerulean sea of his eyes, leaving me with a perfect view of his thick, dark brows, straight nose, angular jaw, and full lips.

FLUX on Goodreads | FLUX on Amazon