Excerpt: I SEE THE WEB by Cait Spivey

I’m super excited to host an excerpt for Cait Spivey’s I SEE THE WEB tour. Especially since that means we’re getting closer to the release of the next book in this series! I’ve been waiiiiiiiiting! Be sure to stop back by on October 3rd for the cover reveal of A SINGLE THREAD (Book 2). It’s funny because I almost didn’t read this because *SPIDERS* but I was pleasantly surprised how zen and magical this book was. Don’t miss this one!

Seventeen-year-old Erin has a lot to look forward to, even if it suddenly seems like everywhere she turns there’s a spider staring at her. She’s finally out to her friends and family, surprising exactly no one. When Dawn, the love of her tender teenage dreams, corners her in the library, a whole new world opens up to Erin. From here on out, it’s all make-out sessions with her beautiful girlfriend in rooms stacked high with books.

Until the spiders start whispering.

Turns out the spiders aren’t just stalking her for kicks. They need her to be their voice, their vessel, whatever that means. But their timing is crap, because there’s no way Erin is giving up her human life just when things are starting to get amazing. Too bad the spiders just won’t quit. Like it or not, Erin will have to choose, and it won’t be nearly as easy as she thinks.

No one likes spiders.

Well, except for those crazy people who are like “they’re just misunderstood!” and “they’re actually super crucial to the environment” and who always post GIGANTIC high-resolution pictures of the hairy beasts to Facebook, so when you’re just scrolling along through your news feed, minding your own business, all of a sudden you scroll too far and you shriek and then you need a new laptop because you hit it with your shoe too hard. This may or may not have happened to me at least once. Twice. Nevermind.

Spiders are dangerous, and not just to aphids and house flies. Some of them can kill you, and that’s why no one likes them. You just can’t take a chance with that little spider crawling on your ceiling. It could be harmless, like a jumping spider. Scratch that, jumping spiders may not bite you but they’re still totally freaky the way they launch themselves around. It could be harmless like a daddy long legs, with a mouth too small to bite human flesh—or it could be a brown recluse, or a black widow, or any other number of species with venom that will effing kill you. Who wants to get close enough to check for a red hourglass on the underside of the cephalothorax?

Not this girl, that’s for damn sure. My strategy is usually to curl up into a ball on the opposite side of the room and beg the spider to leave.

“You’re right next to the window. Just a little further, and out you go, back to the great wide world,” I coach. “You can do it. I believe in you.”

The spider, which is small and black from where I’m sitting at my computer-less desk, doesn’t move. I wonder if I should look away. It can probably tell that I’m staring at it, and it’s not moving because it’s trying to hide. Out in the open. On my white wall. Spider logic. But I can’t look away, even if it might help. Because then the spider might move too fast and I might lose sight of it and not know where it went. Erin logic.

“That’s alright, spider. I can do this all night. You just move when you’re ready.”

I like to think that being polite somehow balances out the part where I’m completely terrified. It does seem to calm the spider, because it moves. My body relaxes a little bit. I watch it inch slowly towards the open window. It moves faster, more confidently, and I actually go so far as to put my feet back on the floor. I lean forward and silently cheer the little bugger on, not wanting to speak and break its concentration. In that moment, and that moment alone, I’m grateful that Mom never got around to putting a screen in my window. If there was a screen, it would have put a whole new sadistic twist on this scene. Ha ha, spider, now you’re trapped and I will watch you slowly waste away between glass and wire! Cue evil laugh.

I wouldn’t do that to you, spider.

See that wasn’t so bad! In fact, I know you’re going to go grab your copy right now! And don’t forget to join me on October 3rd for the cover reveal of A SINGLE THREAD (Book 2)! 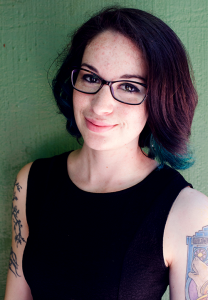 Cait Spivey is a speculative fiction writer, author of the YA paranormal romance novella I See the Web. She is also a freelance editor, on staff for Curiosity Quills Press and REUTS Publications, as well as a managing member of Bear and Black Dog Editing, LLC. In her spare time, she plans her next tattoo (there will always be a next tattoo), watches too much Netflix, and spends quality time with her darling husband Matt and completely adorable dog Jay. The rest of her time is devoted to her tireless quest to make America read more.

One Response to Excerpt: I SEE THE WEB by Cait Spivey